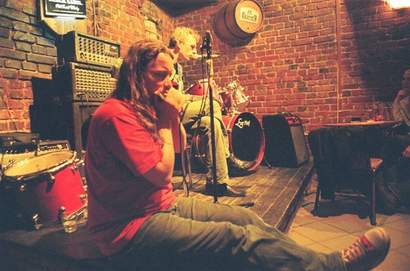 Michał “Cielak” Kielak was born in 1977. He started playing harmonica when he was 15 years old and today he is one of the best harp players in Poland and – as some specialists say – Europe. Cielak's enormous skills — better than the ones many American harp blowers have — made the legendary Steady Rollin' Bob Margolin — master of the slide guitar who played with Muddy Waters for many years and who is a contributing writer to the world's largest blues publication, Blues Revue — invited Kielak on stage to sit in with him during the annual International Blues Challange in Memphis. After listening to Michal's improvisations, Ronnie Ray — harp player and leader of the famous band, The Coolers — called him “(...) one of the best of all Europe”. All those things are confirmed by concerts with the biggest acts in Polish music, including jazz legend Michal Urbaniak, and critically acclaimed CD releases. On February 18th 2005, the song called “Kasa Chorych” from Michal’s solo album, “Tribute To Ryszard ‘Skiba’ Skibiński”, reached number one at Top 10 Chart in Blues Radio Germany — listeners of the show decided that the song was even better than recordings made by the American soul–blues legend, Mighty Sam McClain!

Adam Coolish was born in 1966. The same year when John Lee Hooker released his fabulous „The Real Folk Blues” LP. Coincidence? Not really. Being in love with music – as so many other great bluesmen – Adam started to sing as a child in his local church. Then he went to study in a school of music. After graduating he knew that his aim is to play music from the heart, not from formal notes. 20 years ago eight thousand people appreciated that during his debut performance on famous Rawa Blues Festival; today appreciation continues with blues magazines in Poland and abroad praising his name. Splendid reviews in French SoulBag Magazine and American Blues Beat Magazine, among others, confirm what his listeners already know – Adam Coolish was born to sing the blues. Autobiographical songs talking about real life; hypnotic guitar groove sounding like it would be coming from the best records of the boogie master, John Lee; and the voice – deep, warm and full of emotions. After four CDs, two solo ones and two with his critically acclaimed band Coolish Blues Session, Adam went back to his roots recording “100% Cotton Blues” with the meanest harmonica player in Central Europe, Michal Kielak. The result is a magical meeting between Adam’s Silesian poetry and the essence of the blues. Friendship that connects Coolish with fellow musicians evolved into special Polish Blues Session concert that took place recently. Double CD recording that documents this event is one of the most awaited releases on Polish scene in the last few years.

Sensual guitar playing; mean, wailing harmonica; and the voice bringing to mind images of John Lee Hooker, Muddy Waters and others blues heroes. Traditional sounds flirting with everyday, down to earth situations. Joy and suffering, love and hate, pain and happiness. The blues.

Having critically acclaimed, solo albums under their belts, Adam Coolish and Michal Kielak went into the studio together. They didn’t plan anything, didn’t try hard to record a great CD. They sat facing each other and started playing. After two hours the session was over and their music was born – simple, real and raw. Honest and heartfelt, without fancy arrangements and modern studio tricks, the old way.

This is the blues we all need today more than ever, „100% Cotton Blues”. 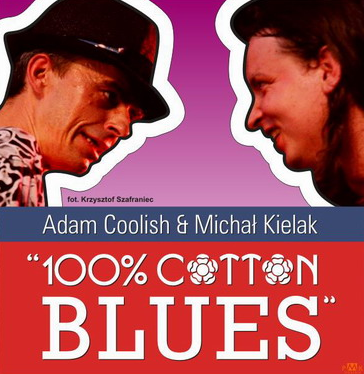